With almost 1000 children aged 3 – 18 and over 200 staff spread over 2 sites at PBS it is quite an operation to get everyone together for a photo. But that is exactly what happened at PBS at the beginning of June and the result is a stunning picture of happy, smiling faces! 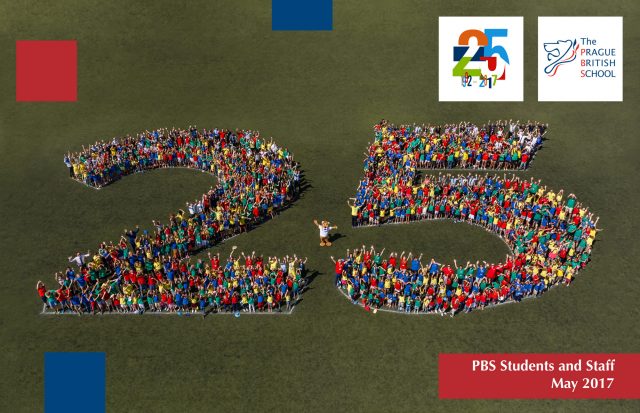 The photo was an interesting way to mark the anniversary, and it certainly proved popular with the school community. The image and a video about the making of the photo was shared extensively in the school’s social media channels and printed copies of the photo are now proudly on display at PBS.

PBS was founded back in September 1992 as the British International School, Prague. The original school was located in the Vinohrady district of Prague and was founded as a Nursery primarily for the nascent expat population. The school opened with just 6 children, however it grew quickly into a Pre-Nursery, Nursery and Primary School before the Senior School was founded in 1996/97

Amazingly, during the period 1992 – 2002 the school operated on 10 different sites, with up to 4 sites serving different age groups in any given school year! With the opening of Kamyk in 2004 and Vlastina in 2008 the school began to take the shape that we know today.

Kamýk is a large site located in the south east of the city on the edge of a large forest. It takes approximately 20 minutes to drive from the centre of Prague to the Kamyk site. It houses a Foundation Stage Unit, Primary and Senior School and the school administration. Approximately 700 students attend the Kamýk site.

Vlastina school is located in the Liboc discrict  in Prague 6 It takes approximately 15 minutes to drive from the centre of Prague to the Vlastina site. Vlastina caters for children aged 3 – 14 (up to Year 9). Children who complete Year 9 at Vlastyina then transfer across to Kamyk for their final 4 years of schooling. Almost 300 students attend the Vlastina site.

In the coming months there will be two more significant milestones in the school’s evolution. PBS will enrol the 1000th pupil in summer 2017, which will mark a long journey from the original 6! Then during the school year 2017/18 the school will be preparing to merge with the neighbouring English International School, Prague before opening as a single school in September 2018. There is clearly still a lot to look forward to in the PBS community!