NewsGleeds as a partner of Prague Harley Days for the first time, attended by its International Managing Director

On Sept 2 and 4 Prague´s Exhibition Centre hosted the third edition of Prague Harley Days. For the first time it was held as a three-day event. Alongside the traditional partners such as Jeep, Mattel and Jack Daniel’s this year it appeared for first time Gleeds, an international consulting firm, that manages investments worth billions of crowns in the Czech Republic. It became a partner of the special exhibition of more than 100 Harley-Davidson motorcycles, held in the Industrial Palace (from historical models to the latest news) and great parade ride of the Prague´s centre, which was attended by more than 1,500 bikers on Saturday morning! Among them was Michael Rowley, one of the highest representatives of this global company operating in 60 countries. 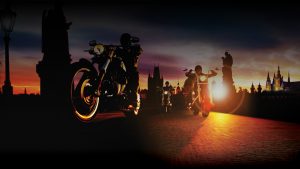